A man runs down a New York street, a figure of intimidation, or maybe a product of paranoid overimagination. He’s chasing, but he’s no sprinter. His target is older but more nimble. Whip thin, dashing.

In 1997, there was big interest in the Dame. He turned 50 that January – has anyone else kept An Earthling at 50 on video, taped from the tellybox but now without any means of watching it? – but even though Earthling went top 10, the reviews weren’t top mark, not that I can recall anyway. Bowie back then, unlike 2013 and definitely unlike 2016, was not critic proof. His rehabilitation was still tentative, and his new direction raised questions: was it a bit forced, this Earthling appropriation of the Metalheadz rhythm pushers? A bit middle-aged desperate?

Not a bit. Earthling is a vivid technicolour assault from a prolific Bowie era that now seems less about reinvention than rediscovery – rediscovering confidence, artistry and those all-important New Sounds. Two years earlier it was Outside‘s hour and a quarter of artsome perfection that had fired Bowie from Black Tie/Buddha Suburbia clubfunk reawakenings into alt-rock’s contemporary orbit, bristling with distortion and aggression yet never at the expense of melody and experimental rock nous. The Outside album was/is Bowie at his (then) modern-day best, and a co-headline world tour with Nine Inch Nails shunned the safety of a megahitsbestof, stringing itself up instead on the new-age visceral. ‘twas bold and darkedge, gothy even. Bowie was 48.

Earthling, however, bore none of its predecessor’s interludes and art-murder narratives. Earthling gets back to songs – a lean 10 – all of ’em packed with Bowie hooks but jammed and comped with loops, cut-ups and electronic beats. Earthling has no space. Dense sensory overload is queen.

What this means is that even now, just about 20 years after its release, the

hypertwitching drumnbass bigbeat skitter of Little Wonder hits hard like no other opener in Bowie’s back catalogue (Blackstar excepted, but for very different reasons). With his zeitgeisting muse fully open and receiving, Earthling was the last of his records – again, until Blackstar – that really pushed it, form-wise. Must have scared the shit out of the Bowie casuals, though they probably weren’t listening too hard anyway. Who was?

Earthling: db does dnb (a bit)

Young Lollapalooza and Sub Pop heads, surely – the 90s coming-of-agers, the naive souls who had no truck with Tin Machine’s Under the God, the NIN fans getting  a kick out of the crossover. It’s those (us) who’ve got the hots for Earthling, and we don’t understand those who haven’t.

Little Wonder and I’m Afraid of Americans are the best known tracks, and for all of Little Wonder’s beaty thrill, it was Americans – the most overt hook-up of Bowie and Trent Reznor – that really planted an alt slant on the album. Trent-man appeared in the video, bloated and looking like shit – his Fragile years – but in the studio was peak-condition lean, forging six I’m Afraid of Americans mixes for an album-length maxi single including a radical 11-minute ambient deconstruction. Ice Cube and Photek got drafted in as well, making it a satisfyingly experimental listen in its own right, but even the original Americans – from the album, not on the single – has an abrasive NIN-jection, souping up the Pretty Hate Machine-ry with industrial production.

Seven Years in Tibet is the album’s sole nod to something calmer – sleazy mechanics lurk under clean chords (like Reznor’s Closer?) – with sax to soften, but for the chorus, the Earthling Overload Factor does a wreak-and-destroy job that exposes the lyrical noir all the more:

You’ve been shot in the head

And I’m holding your brains

Yeah… Bowie’s having an absolute blast on this record. It/he is urgent and nicotined and caffeinated and PLAYFUL, and so is the band. Cut-up non-sequiturs a la Burroughs, la-di-da lyrical tail-offs and guitar assaults from Reeves Gabrels (see Battle for Britain, you’ll know) combine to blow pretension and self censure clean off … no subtlety here, and Gabrels’s fireworking solos are built for the self-sampling chop-ups we got going. The Last Thing You Should Do has THE most violent eruption of guitar in a Bowie track ever. Probably. Heavyweight euphoria, total fucking release, go bask in its sprawling crunch after the 2nd chorus. Gabrels stamps all over Earthling, but then again, so does everything. It’s that kind of record. 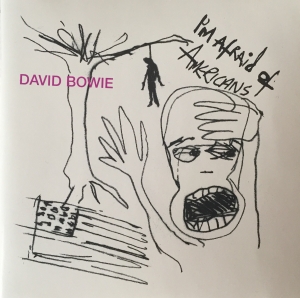 Be afraid: the remixes

Got to mention Mike Garson as well, doing his thing as un-usual since Aladdin … check his whacked-out plonk at the end of Battle. Does it blend? No. Does it work? Same as it ever did: YES.

Dead Man Walking beats a hi-nrg path to club night (is it true that the F-to-G riff was shown to Bowie by Jimmy Page back in the day and then used on The Supermen?) and Telling Lies takes the drum-bass flavour up a notch, but what about the last track, Law (Earthlings on Fire)?

Possibly the most overlooked track of an overlooked album, Law shifts Earthling’s balance. Without Law, we’d have had a neat I’m Afraid of Americans finale and a taut 44-minute record. With it, we get a paranoid streak of dark danceable menace that takes the self-sampling ethos of the album to an OTT climax: EVERYTHING is in here … robotic bass, disco hi hats, clipped guitar funk, heavy metallic chug, retro futuristic keyboards and, through it all, the endless repeat of a paraphrased Bertrand Russell:

Prescient stuff. The soundtrack to a chase.

Is Earthling the album Bowie shouldn’t have made? Listening to the classic forms he returned to, you could say that it was a step too far – but I don’t believe that. Earthling isn’t the seamless immersion in a genre that Young Americans and Low are, nor is it the creative totality that Station to Station, Heroes and Outside are. It can be a bit leaden at times, BUT…

…man, Earthling’s exciting. And for a production-heavy electronica-heavy record, it’s raw and alive with enough balls to rough things up. Earthling’s got an energy that has not waned – it STILL sounds tooled up on Red Bull and cigarettes. With no complex layers, no hidden meaning (though I suppose you never know) and no ballads, it’s like the brash younger sibling of Outside that you can rock out to. And again, true to Bowie form, it’s an album that sounds like no other in his back catalogue …another satisfying one-off from the Master.