Ritual Union returns for its second year and you probably know the drill by now – four stages of bands on Cowley Road and some in-stores at Truck Store. Bo Ningen destroyed the place last year. Is anyone gonna carry their fearsome torch this time around?

Everyone has their own path through a multi-stage multi-band bill like this, and our path starts at Gnod Central: use the Salford collective as an immovable anchor point and work back, up and around the rest of the schedules. 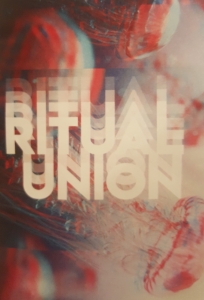 Right then, where to start? Being familiar with the tastily grooving Loner Boogie (but nothing else) from Boy Azooga, we might as well head to the Bullingdon for a 1.30-ish kick off with Cardiff’s homegrown. But while getting wristbanded for Ritual Union admission, the doors are leaking a very un-riffy waft. Into the venue itself and it’s full-volume Boy bland. Needs salt – lots of it, and quick. The place is packed to the back though, so they must have got something right somewhere, and that somewhere is evidenced on the next track. Introduced as a new one, it packs the rock salt and jams on a thick, just-dirty-enough riff and yes, ’tis good. And so they go, a likeable young bunch who no doubt finish off with a massive Boner Loogie, but I’ll never know because even that highly tempting proposition isn’t quite enough to sacrifice Ghosts in the Photographs to the Timetable Gods. Time for a polite Azooga exit and a swift dash up to The Library for the last 10 minutes of the Oxford band’s set.

Any band who did a session for Marc Riley on BBC Radio 6 Music last week has to be worth a look, so the next stop is the larger-than-life Warmduscher. Post-punkish angles, sharp endings, shitloads of gothabilly reverb and odd tales that don’t sound remotely serious, relayed by a guy in a sports jacket, shades and a cowboy hat. You gotta love it: party Warm. And with Fat White Family bloodlines running through the band, there’s no doubt a fair amount of muck as well.

Compelling in a very different way is Kiran Leonard who clips some wired, wiry discord that scores pretty high on the awkward-ometer. Spiky jangle jerk and twitch. Leonard’s voice is an acquired taste of often fast yelps that hit and miss while he battles the guitar like he’s plugged into it himself. You have to watch. Great band too, especially the drummer. If Tim Buckley grew up with the New York alt rock underground and hired a Ryley Walker rhythm section, would this be something like? Much to check with Kiran Leonard, and whatever falls out of his albums, it won’t be dull.

Right then, the big one. After all this talk of angles, twitch and flinch, good as it is, you’re ready for a proper fix from the promised land of amplification, riffs, industrial intoxication and body-beating catharsis. You gneed Gnod.

Anything like the oversized Unkle Frank Says Turn It Down would be a welcome flooring, right? But we don’t get it, nor anything close to it. Anyone hoping for Chapel Perilous Gnod or Just Say No…Gnod is not gonna get their fix because tonight’s incarnation of the Salford noisemakers is Heavy Electronic Ambient Gnod – two guys, electronics, subterranean drones and pulses, and a fuzzed-out film backdrop. Art Installation Gnod. Riiiiight. What does it all mean? Let’s open up and wait for the transcendent hit, the doom-shaker resonance, the seismic epiphany

nothing. Boring as fuck. To stand and watch 30 minutes of Nothing Happens – not even a building hypnotic swell – is a mega switch-off, and that time is flushed forever. Hilariously, when they end the set they forget they’ve been scheduled for 45 minutes not 30 so they crank it back up for another 15. Sure, we could leave, but in for a penny in for a pound … of false optimism. Bit gutted, really. Those recent albums make a majestic racket and the prospect of Gnod noise done live was reason #1 for getting the gig ticket.

Anyway, it’s nothing a G&D coffee stop can’t fix and we’re onto just two more bands from the slicker end of the day. Ghostpoet pulls out a goody, his downbeat noir beefed nicely by the live band, and Ghostpoet himself being more animated than expected. Many Moods at Midnight opens the set and a keyboard-heavy Freakshow shuts it, but the penultimate heavy-hitting Immigrant Boogie is what it’s all about. Amped, man. Sol-id. Not ghostly.

Closing the day is Gaz Coombes, and the star quality is obvious. His voice is in top shape, as are the band and backing singers who flesh out his solo gems like Walk the Walk’s delicious falsetto funk and the addictive moto-pulser Deep Pockets. Guitarist Nick Fowler spreads enough grit to rough it up in the right places, and it’s a job well done by a class act. Hats off to the hatted one.