Some pretty big names came out to play in March, so here are our customary first impressions of a couple or three. Warning: contains heavy metals.

CORROSION OF CONFORMITY: No Cross No Crown
Not strictly – or even slightly – a March release, given that the vinyl came out in February, but who cares? A new record from a Keenan CoC is a 2018 event, so there’s no rush … everything in its own time. A bit like No Cross No Crown itself. 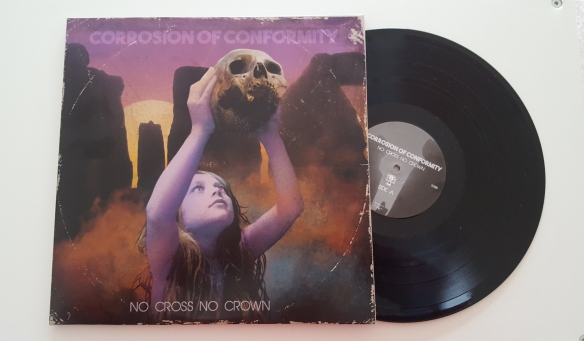 No Cross No Crown: no corrosion of CoC values

As soon as Novus Deus’s heart-beating doom-tinged Thin Lizzy lead-in gets underway and into The Luddite, you sense an enormous record opening out ahead, and so it turns out to be. Up-sized rockage, guitar parts multiplied and solos snaking across the many twists of riff, it nabs the best of CoC and gives it the max factor. Corrosion Complete. Keenan’s Down-time must have done them a ton of good as a four because they’re re-fired with vitality – check Cast the First Stone’s raging burn, check the return of the instrumental interludes, check the southernfrieddoompsycheheft of Nothing Left to Say. It adds up to CoC just doing their thing really, really well. No surprises

Yes. Son and Daughter. YES. Grin your head off at the ludicrous brilliance of heavyweight Queen made over by these unglam non-pomp veterans, then submit to a face-gurning rock-out as Brian May’s timeless riff calls time on Corrosion’s studio return. They must have had a blast doing that one. No Cross No Crown: mature, wizened and quite possibly all we’ll need from a heavy rock set in 2018.

JUDAS PRIEST: Firepower
When you get an earworm two days after your first and only hearing of a track, you know something is horribly right or more-horribly wrong: stride forth Children of the Sun, you metallic hooksome bastard. From where? From Judas Priest’s new Firepower set. Seen the reviews? Best since Painkiller, they say. I didn’t buy any post-Painkiller Priest, so cannot join that comparative choir, but just one run-through of Firepower tells you that this album is wholly unadulterated metal, in Priest’s finest un-adult way. If you grew up with Painkiller, Firepower is a mainline to your adolescence – it is EXACTLY of Painkiller’s ilk. Everything feels either like you’ve heard it before or you knew it was coming, and yet somehow it feels right. Halford sounds no older, the twin leads bleed melody and the Allom/Sneap production insulates you from the world’s daily grind, maybe even from time itself. This is escapist listening. The title track and Evil Never Dies burst with thrash speed, but for the most part we get mid-paced metal that has all the metal/Priest tropes. It even ends with a fucking ballad. And you know what? GOOD. Lone Wolf is the biggest diversion, proving that Priest can pen a dirty lurch equal to Metallica’s greasier Load moments. So yeah, press Firepower and give yourself permission to bloody well enjoy it.

LEGEND OF THE SEAGULLMEN: Legend of the Seagullmen
Danny Carey. Brent Hinds. Holy Tool-odon, what’s this Seagullmen shit??? And can I wipe it off without burning my eyes?

If the name sounds like it fell out of a Mighty Boosh brain dump, so do the music’s characters. We’ve got The Fogger, The Seagull God King and a 400,000 year-old pirate called Redbeard, all mixed up in tales about curses and red tides and orcas and giants and oceanic karma. Hollywood director-animator Jimmy Hayward plays guitar. Hmmm. So far so daft, right? Got some decent chops lurking though (Carey, Hinds, Zappa Plays Zappa bassist Pete Griffin), but aside from Masto-man Hinds and his searing solos – Curse of the Red Tide and Rise of the Giant being two current faves – all other muso pretensions are lost to the epic seafarer metal demanded by The Doctor’s concepts. It’s not the mystical prog opus you might expect or hope – Tool meets Mastodon it definitely ain’t, and it sure won’t be challenging Tool in the sobriety stakes. But if you’re a fan of the players involved, you’re going to want to check it out, and because you’re a fan, you’ll look to give it a shade more benefit than doubt, even if it doesn’t match up to its players’ reps.

Right, that’s that. With Between the Buried and Me (Automata I) and Oxford’s own Desert Storm (Sentinel) also kicking out top notch new jams, as well as the still-unheard Mindfucker by Monster Magnet, it’s been a heavy month with no time for avant adventures. METAL ONLY.

Hang on, what’s that? Anthroprophh just put out Omegaville? Right…