Can you tell the mood of a band from the sound of an album?

If there’s one thing that comes through on Sacrifice, it’s a band TIRED. Or annoyed. Or pissed off. Or all of that and summat else too. There’s a weariness and a breaking-point groucho to this album, probably stirred by Wurzel’s place (and soon to be ex place) in the band. He left when it was done, marking the end of the Burston years and, with it, the end of Motorhead as a four. Check the photo on the back of your CD to see if Wurzel is in it – pretty sure I once read that he was taken off the back cover of later pressings. From then on it was Lemmy, Phil and Mikkey, right up to the day the Motor’s engine died on December 28th, 2015.

So yeah, Sacrifice is tired but in no way is it slow, and it’s definitely one of the more diverting Motorhead listens. Awkward, aggressive and downtuned heavy, Sacrifice is muddy as shit, miles away from Bastards‘ sunnier Californi-crunch, and all the better for it. That’s not to say that Bastards is iffy – Burner, Death or Glory and Liar see to that – but it dips in the middle and Born to Raise Hell is shite. Sacrifice is where Motorhead get neck-deep dirty with some muscular chops. 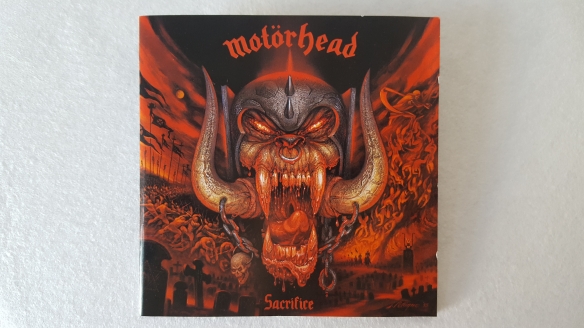 Brutal end of an era

Let’s start with Mikkey Dee, because the drums here are fucking knockout.

A then-future Dee said, on the Inferno bonus DVD, that it would be so easy to overplay Motorhead songs and complicate them, but even though he doesn’t overplay and never has, it does feel like he was cut some drumming slack – either that or he asserted himself and called more shots, ‘coz his second full album with the band sees him contribute a lot more than just tempo shifts.

First track Sacrifice is your archetypal Motorhead firestarter. Like Judas Priest’s Painkiller, drums define the intro, but where Scott Travis went hell bent for speed in one of the metal’s bestest opening gunfires, Dee cuts a rumbling discharge loose that totally sets the mood for the record. Bruising. After Sex & Death dishes a quick 12-bar punk ‘n’ rollock, Over Your Shoulder throws the first of those Sacrifice ball curves:

Was that a mistake in the intro?

Flick it back. Play it again. Miss the beat again.

Eh??? Feels like Dee comes in late and corrects everything, but it’s no error – they do it again later, and it’s doubly weird when you hear it in a Motorhead track because … well, because this is Motorhead and they play rock and roll, right? Yet this tiny bit of rhythm-shifting becomes a top Sacrifice moment precisely because it’s so un-Headly. Love it. Hulking groove-beast of a tune, too.

Right then, a couple of other Sacrifice killers. Despite its weary intro, Order/Fade to Black is a monster – wait for the pick-up AND the pick-up’s pick-up for double-kick manna that makes air-drum goons of us all. Throw in a sleaze-bender blues metal breakdown afore a final speedout and you’ve got a pretty packed four minutes.

Dog-Face Boy is DOWN. As in, tuned down, further down. Again, not your typical Motorhead move (a nod to the prevailing grunge winds of the day?), but the dog-face one shoves it right up the mid-tempos, Motorhead-style.

Make ’em Blind has zero guitar, not till the midway when solos square up and face off, and even then they’re knocked back in a distant squall. Before then we get rhythm and a cappella as Dee pairs it up with Lem’s bass-and-growl for a military march, but one that’s more off-road stealth than parade-ground flash. It’s arrangements like this that pull Sacrifice up and out from any bogged-downers you might have got from mudsome first impressions.

Seeing as we’re speaking of bogs, does anything sink the album?

Not really. It’s not long, and there are no dodgy covers, which always helps. Don’t Waste Your Time is the token rock ‘n’ roll workout, but it’s one of their better ones, snatching Going to Brazil‘s vibe and even laying on some S-A-X, though the Brazil good-mood is squashed by Sacrifice’s general scowliness. You might say that Out of the Sun is an anticlimactic closer, but even then there’s a redemptive bass and solo outro.

Sacrifice has brute force. It’s a battler. War is a standard topic for Motorhead, but Sacrifice sounds like it almost IS war – a band fighting with trench slogs and breaking points, Lemmy barking the orders with middle-aged hoarse. You can feel the tension and the strain

and yet, it’s a great record, one that moves off the template a bit and lacks neither pace nor groove. If you’re doing a Motorhead gap-fill of their later years, don’t skip it – Sacrifice is a proper gnarly bastard.

This review was started a while ago, intended for the first anniversary of Lemmy’s passing. Didn’t get anywhere near finishing it. The idea was to shine a yellowed fading torch on some of those less mentioned non-‘classic’ Motorhead albums, but now that Eddie Clarke has joined Lemmy and Philthy in the Great Bar in the Sky, we just have to give him a mention after a non-Eddie review. But what can we say that his guitar hasn’t said already? Better just to pick a bunch of top Fast EC moments and play them, like We Are the Road Crew’s ferocious solo and feedbacker ending. And Ace of Spades, obvs. And the whole of Overkill. RIP Eddie Clarke.