Track one: OVER. THE WALL. Foolhardily suicidal, or a Buster Gonad-sized show of ballsiness?

Buster G all the way, thrashers. When you’ve survived as much and as long as Testament have, there’s no danger of an old-skule anthem – a GENRE anthem, no less – blowing your load too early because you know you’ve got a tankload of classics to unearth, and that’s exactly what they do for the next hour and a half: lay a thrash masterclass on us with a line-up that almost defies the eyes. Chuck Billy front, Steve DiGiorgio bass, Alex Skolnick and Eric Peterson guitar pyro and, possibly the highest of highlights, machinist Gene Hoglan on drums… shit-yesss. Can’t claim familiarity with all or even most of his credentials but his un(s)toppable human-industrial assault on Strapping Young Lad’s City has blown my mind for nearly 20 years now, so the chance to see the SYL/Dark Angel/Death backbone ain’t one to miss. And here he is, with Testament in a not-packed O2, and their opening shot is Over the Wall. Does it get much better? 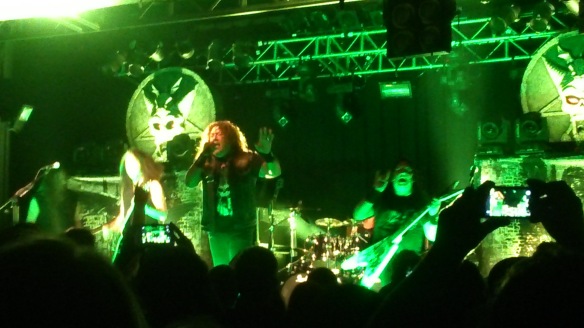 One look at Chuck’s permasmiling face says it all: no, it doesn’t get much better, and his virtuoso mic stand air-guitaring tells you that he’s having a ball up there (though he still looks like he could twist your head off one-handed). As for Skolnick and Peterson… effortless displays of musicality and velocity.

Tracks played? Take your pick from any number of goldies from a lifetime in the thrash premiership…. The New Order, Dog Faced Gods, Practice What You Preach, Disciples of the Watch, Rise Up and More Than Meets the Eye span it all, while the mosh-mental Into the Pit – ‘written about the crazy motherfuckers when we started, and now it’s for YOU crazy motherfuckers’ – does no wrong. D.N.R. is, with Hogan propelling it, fearsome.

Formation of Damnation seals the night off, and if Chuck is distracted by mic issues then no-one on this side of the stage is. Formation is as rampant as everything else tonight and a colossal reminder not just of how special Testament are, but of how relevant they remain. Tonight’s gig has a real family feel about it, and at the head of it all is a class-act combo of passion, precision and bullshit-free speed metal.