Record Store Day came and went, as it does at this time of year. Did you go?

Me too. Did you buy?

Me too. Did you buy any specials?

Nope. Had a half-hearted peep over the shoulders of the eager while quickly tuning out (you’ll see why) of a conversational pissing contest next to the RSD vinyl display (where else?) about the bassist in (wait for it) Hot Chip (told you). Do they have a bassist? Maybe it was someone else in Hot Chip. Or a different band that also has a bassist. Either way, big points were being scored in this rally of Geek Pingpong in Pseud’s Corner, but over in the Business As Motherfucking Usual section – used metal, since you ask – there were a brace of bargainous pickings from the scrap yard: Soilent Green and End of Level Boss. Top stuff, weighty. Nothing to do with the day itself but still, Truck Store had a buzz and a body count and that’s what matters.

Where do you stand on Mike Patton? Depends how annoying you think he is, I guess – windpipe? Testicular area? – but in last month’s Rewind we pointed to the Many Many Bands of Mike Patton on ye ole digital wireless. Drawling John Doran of Quietus fame was Maconie’s guide through some of Patton’s adventures and Mr Bungle, Fantomas, Dillinger Escape Plan and Faith No More themselves got their magnificent selves duly played, but the bestestweirdestexcitingest track of the show – and this is coz I’ve never heard it – was from Patton’s 1997 Pranzo Oltranzista album. With John Zorn and Marc Ribot on there, you know it’s gonna be avant, and with Patton free of band constraints, you know it’s gonna be based on Futurist Cookbook by Filippo Marinnetti. Don’t you? Er, no. Me neither.

Couldn’t help but pick up on a sniffy attitude towards Faith No More from Doran though, and it’s a sniffy that Maconie seems to share. ‘Bro-style rapping’? Records that were ‘overproduced for the day and sound terrible now’??? Surely that puts way too much weight on That Track and views the whole Patton era through an Epic filter, which is precisely how FNM fans don’t see it… well, not me anyway. Epic was always the anomaly. Get some Caffeine.

But at least Patton and co are still with us, which is more than we can now say about the sudden lonely passing of pop’s last great muso megastar, Prince. I’m not a fan, but I wish I was – and by that, I mean I never got round to cherry-picking the vast Prince vaults for the guitarfunkenrock end of his infinite jams, so I guess the discovery starts now. 3121 – the sole Prince album in the collection so far – has been a worthy replay of late; beyond the too-lightweight tracks you get multi-layered gems like 3121‘s slinky throb, Black Sweat‘s falsetto funk-industrial, and a heavy dancefloor strut n’ tease by way of Love.

While this space is not going to be an ongoing tribute to musicians who pass, we have to acknowledge that 2016 has been a shocker for rock departures. Lemmy left us last year, but only just last year, and so we sign off this month with three shades of greatness in one snap: 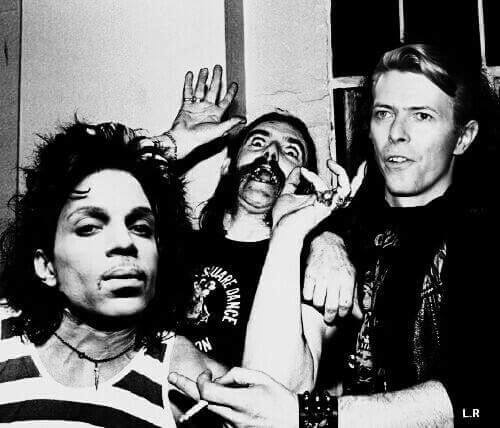 2 thoughts on “RSD and a royal RIP”